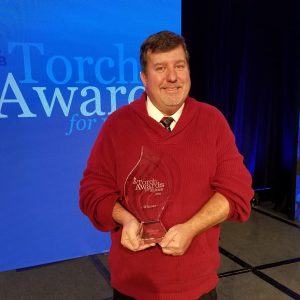 Bill Robertson started his business career in the wholesale warehouse industry at Price Club (Costco) and then Pace (Sam’s Club).  He was a front-end manager, merchandising manager, and a senior duty manager responsible for 3.5 million dollars a week in sales and 225 employees which included 15 supervisors when he was only 23.

He has worked in the entertainment industry in front of and behind the camera as a model, actor, writer, production accountant, producer, location scout/manager, concert promoter, band manager, night club DJ, on air radio personality, and more.  He produced the groundbreaking award-winning feature film, “I Love You Came Too Late.”

As a writer, he has written or co-written seven screenplays, numerous feature articles, news articles, editorials, movie/concert reviews, and press releases.  He has been published hundreds of times in a variety of formats.  He recently turned his attention toward children’s/family books and expects to publish at least four books in 2022.

He worked in the mortgage industry for the better part of the last twenty-five years as a licensed loan officer, social media manager, branch manager, licensing manager, training manager, public relations manager, customer experience manager, and HR manager; having worked directly for the CEO, COO, or a VP at every company.  He wrote and developed Secure One Capital’s B.E.S.T. training for new loan officers.  He also created numerous training programs for loan officers at Bristol Home Loans and Essex Mortgage. He taught the 20-hour Pre-licensing SAFE Course for mortgage licensing, and he created and taught an 8-hour Test Prep Crash Course.

Bill has been a guest on The Tim Conway, Jr. show and The Bill Handle Show on KFI AM 640.  He also appeared on Premier Magazine (Radio) Live with Kent Shocknek to discuss independent film making and the groundbreaking technology used on “I Love You Came Too Late.”  He appeared in articles in the Long Beach Press Telegram, the Irish News and Entertainment, and the Irish Times Magazine of Southern California.

He was a board member of the Los Angeles Police Emerald Society, the Hollywood Congress of Republicans, and is now on the executive board of SknVue.

My Uncle Dan was my Godfather and is the namesake of my son, Daniel.  He was a top salesperson for Pepsi Cola, 7-Up, and a few other notable companies.   His job was essentially to play golf with decision makers and buyers of companies to whom he sold his product lines.   Over a 30-year sales/golfing career, he played golf several times per week.  Unfortunately, he did not use sunscreen.  Afterall, it was the nineteen fifties, sixties, and seventies … who wore sunscreen?  In the early 1980’s he developed skin cancer and lost part of his nose and cheek.  He eventually passed away as a result of his skin cancer.