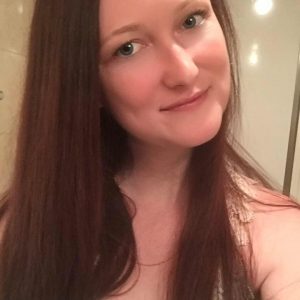 Ava resides in beautiful San Diego, California.  She is the Vice President of Social Media and Communications for SknVue.

She graduated with honors from Marymount College before attending and completing bachelor’s degree in Communications from the University of Phoenix.

She enjoys talking with people and learning more about them whether it’s just about the weather or having a philosophical conversation. She believes that everyone has a story, and her education helps her to home in on that social ability and skill.

She is proud to be a part SknVue, stating, “SknVue is such an amazing non-profit organization because everyone should be informed and educated on skin cancer and how it can manifest into a very real problem.”

Outside of work I love spending time with my family, friends, going to Comic Con and traveling as much as possible.

My grandfather was a Yacht Broker and Captain of the Coronado Police Reserves which equated to him being in the sun a large majority of the time.

I remember when I was a little kid, he always had Band-Aids on his face, top of his head, ears, arms, etc.  I would ask my mom what happened to him, and she told me that he had skin cancer spots. Of course, at the time I had no idea what that was, except for the fact that my grandmother had died from cancer.

Whenever my mom told me that he had cancer, I would cry because I automatically thought he was going to die, too.  My mother comforted me by telling me that, “It was a different kind of cancer, and he was having it treated.”

As I got older and learned more about skin cancer, it did scare me because he could have died from having had skin cancer.

It was at that point that I realized just how very important it was to take care of your skin and have yourself checked regularly by a dermatologist because skin cancer does not discriminate.